One feels the rich cultural heritage of the island at every corner. Churches, monasteries, Renaissance buildings, basilicas and remnants from the ancient times can be found all over the island.

Museum of Apoxyomenos – This unique museum is dedicated to the statue of Apoxyomenos whose story begins at the very entrance in the blue room on the ground floor. The nine scenes of each room offer exquisite sensory experiences. By means of taste, smell, hearing, and vision, the visitors can fully and individually experience the Apoxyomenos, as well as the destination of the island of vitality.

The town of Osor is in fact an outdoor museum in which artists from all stylistic epochs have left their marks (it includes works by contemporary artists such as Meštrović as well as remnants of ancient walls, forts, and the first Early-Christian basilica). It is a town-museum with gardens and parks in which traces of ancient villas, Renaissance portals and monasteries are hidden. During the summer, this town that represents history and a museum at the same time becomes a unique scene abounding in cultural events.

The Fritzi Palace has been hosting exhibitions since it was the seat of the Public Institution, i.e. the Adult Education Centre of Mali Lošinj. Until 1998 they were mostly organized in the Great Hall and later on in the gallery of the Great Hall and on the walls of the corridors and stairways as well. The reconstruction of the third floor and the attic of the Palace during 2005 and 2006 gave Mali Lošinj the opportunity finally to have a proper town gallery.Consequently, in August 2006 the Fritzi Gallery was solemnly opened on the ground floor by exhibition of paintings and graphics by Dubravka Babić. Since then a great number of exhibitions have been organized there, from art and museum exhibitions, to guest exhibitions and various events as well. Gallery’s Exhibition Program runs throughout the year. The Fritzi Gallery was placed among the reputable galleries in the Republic of Croatia. 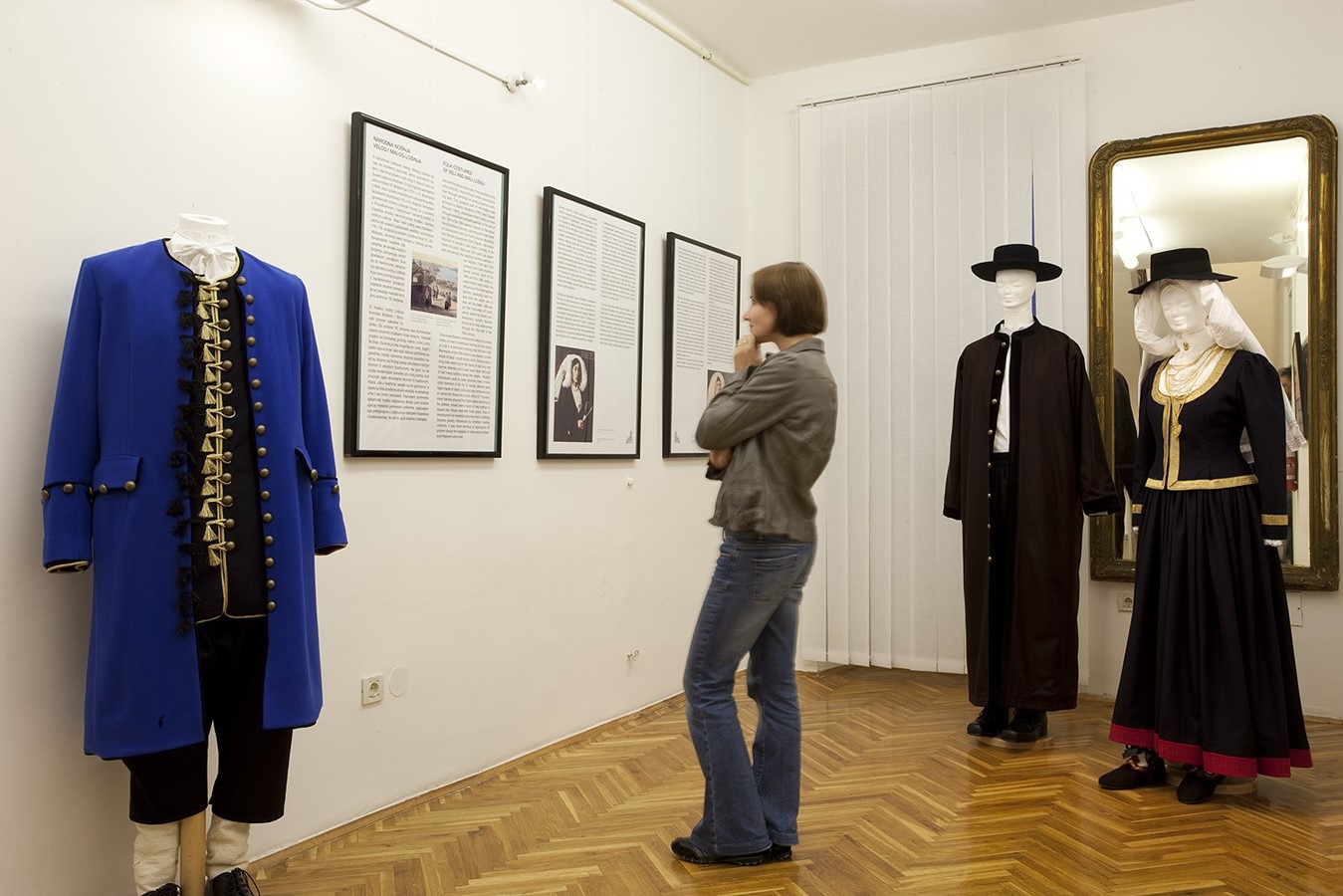 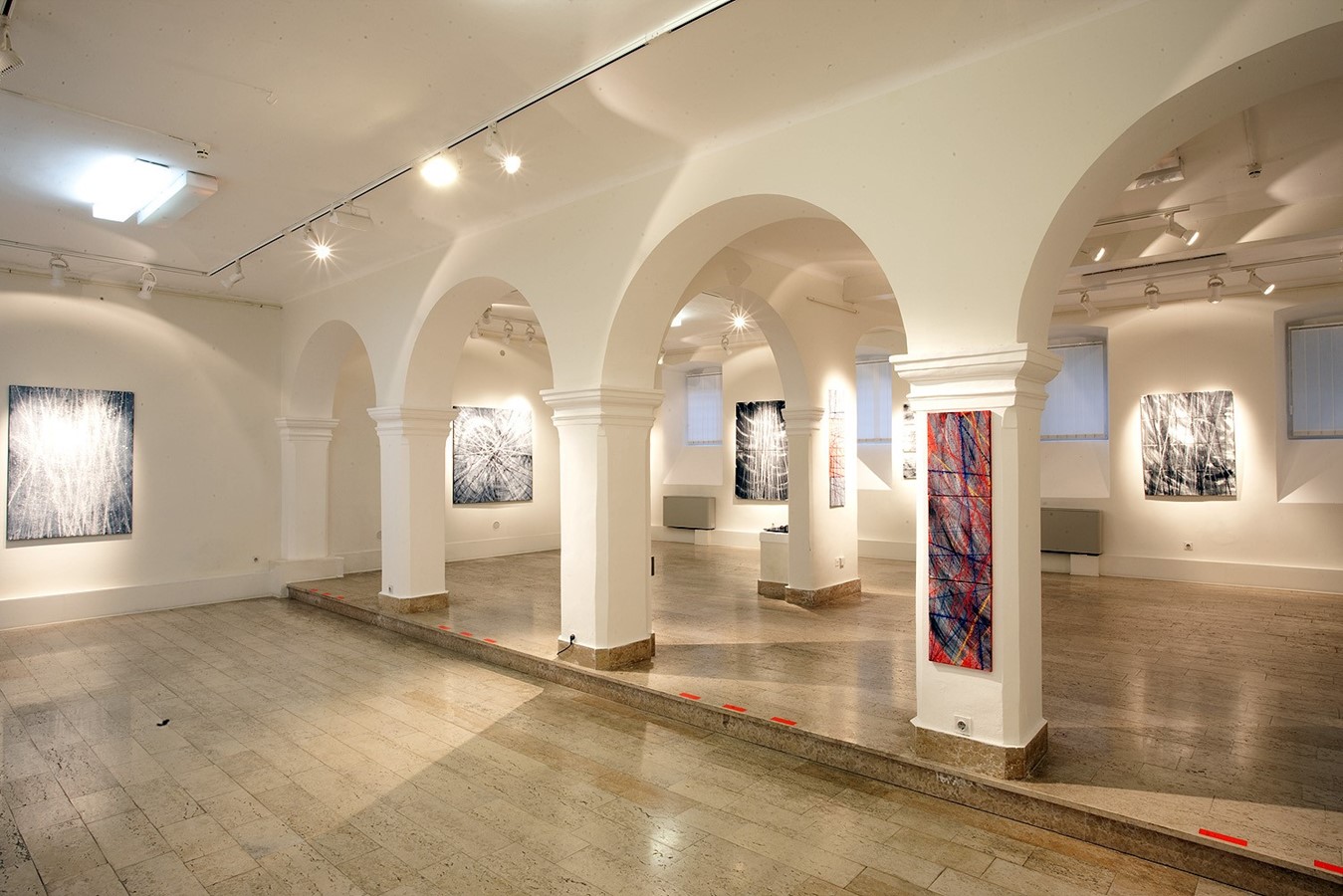 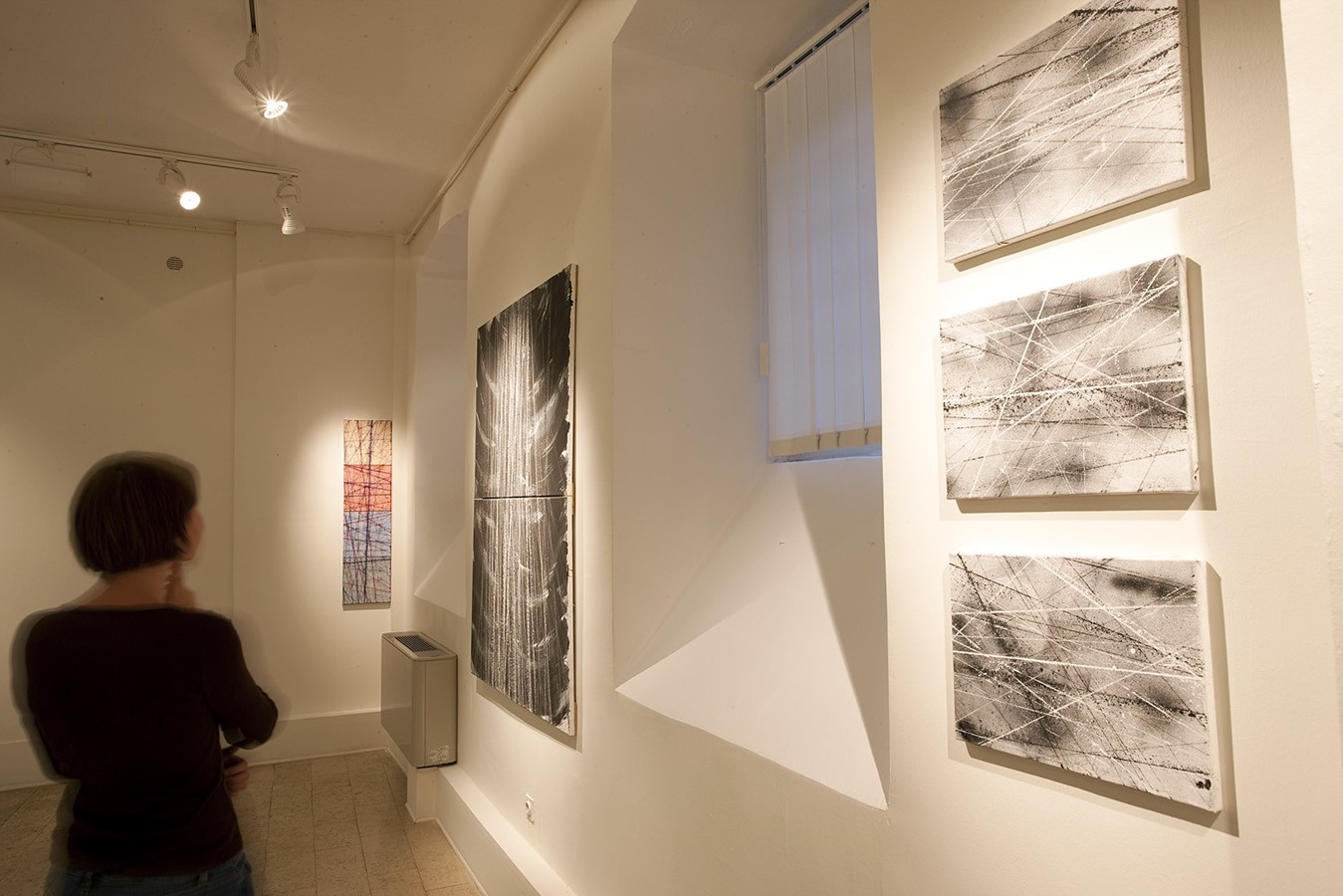 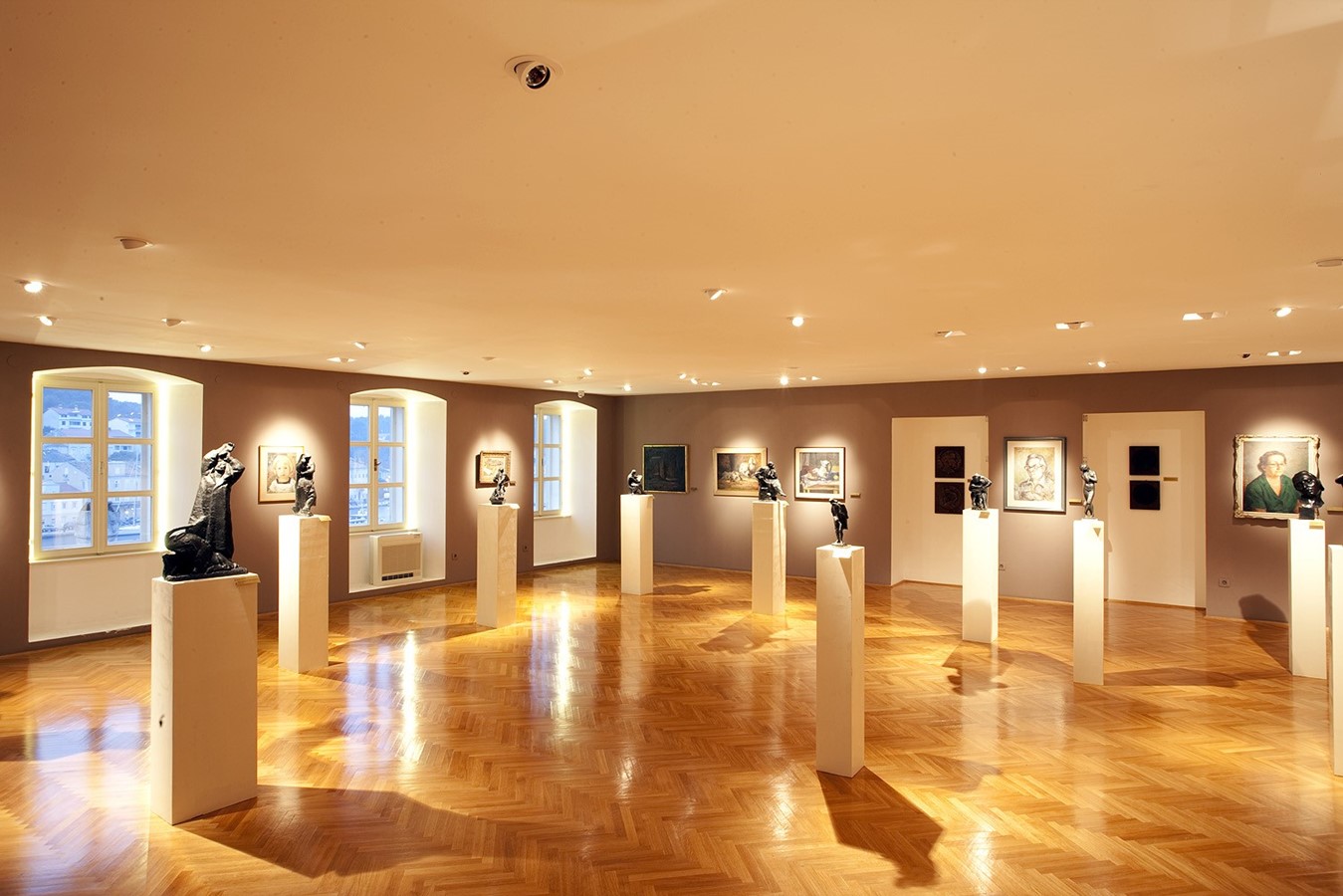 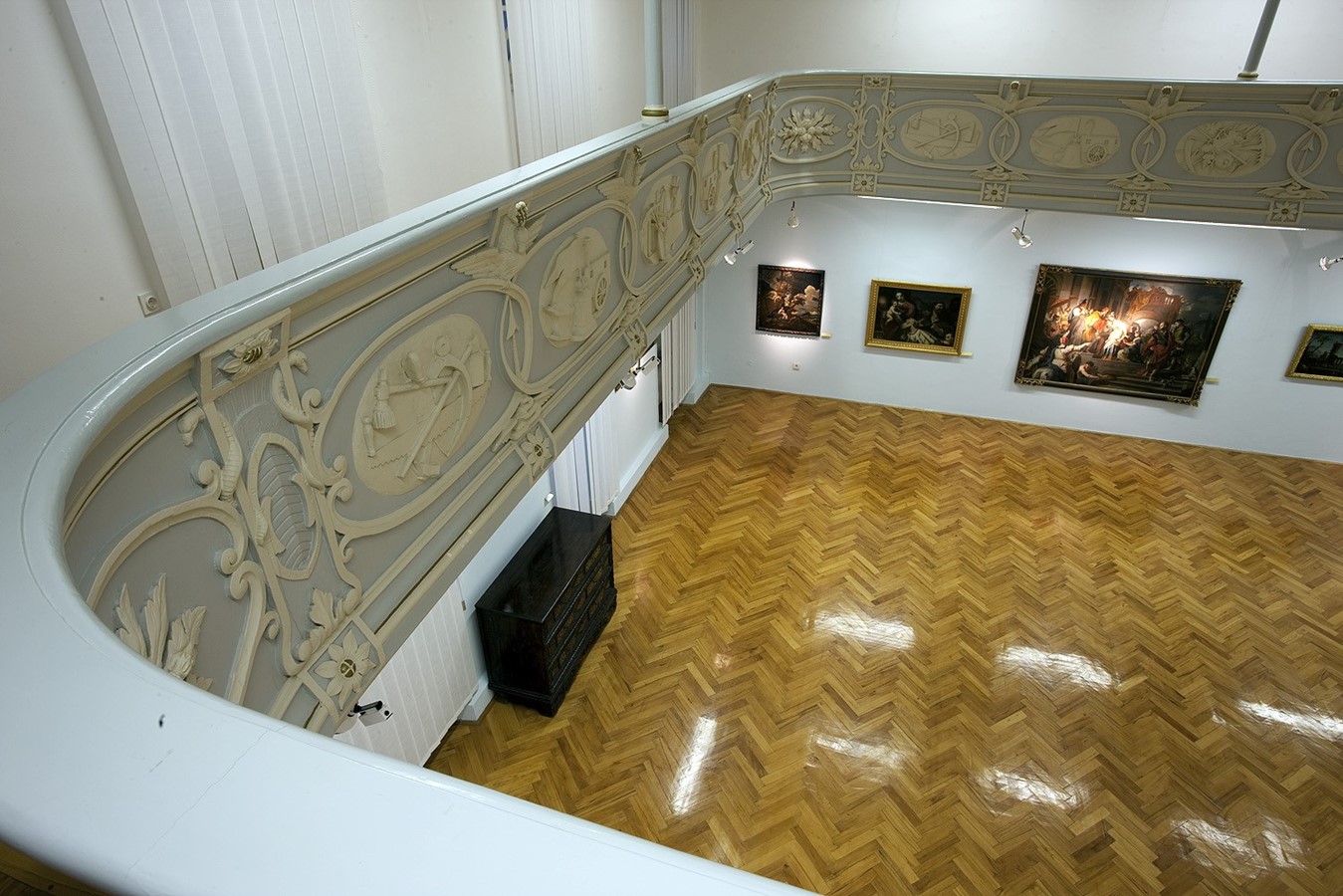 Croatian Apoxyomenos (the „Scraper“) is a bronze statue that dates back to the 1st or 2nd century BC. This type of figure was first developed by the Greek sculptor Lysippos of the 4th century BC. It was discovered underwater in the Lošinj archipelago near the uninhabited island of Vele Orjule. The Lošinj Channel was a frequent navigational route leading to the northern part of the Adriatic, to Istria and Italy. It is believed to be from a Roman shipwreck although there are no other apparent remnants. Apoxyomenos is one of the Greek conventions in representing an athlete, caught in the familiar act of scraping sweat and dust from his body with the small curved instrument that the Greeks called a strigil. The statue now resides in the Lošinj museum in the Mali Lošinj harbour.

The Museum of Apoxyomenos is a unique archaeological and architectural cultural institution in our region and it is entirely dedicated to only one exhibit – the bronze statue of a young athlete, the Apoxyomenos. The statue was discovered in 1997 by a Belgian tourist at the depth of 45 m. In 1999, it was taken out of the sea where it spent nearly two millennia.

This beautiful antique sculpture has become Lošinj’s symbol and trademark, after nearly 20 years from the discovery and to his return to the Museum created especially for him. The Apoxyomenos’ timeless beauty, his unusual and mysterious story, and a distinctive museum setting haven’t left anyone unimpressed!

Professional guides are held twice a day; At noon and at 5pm. 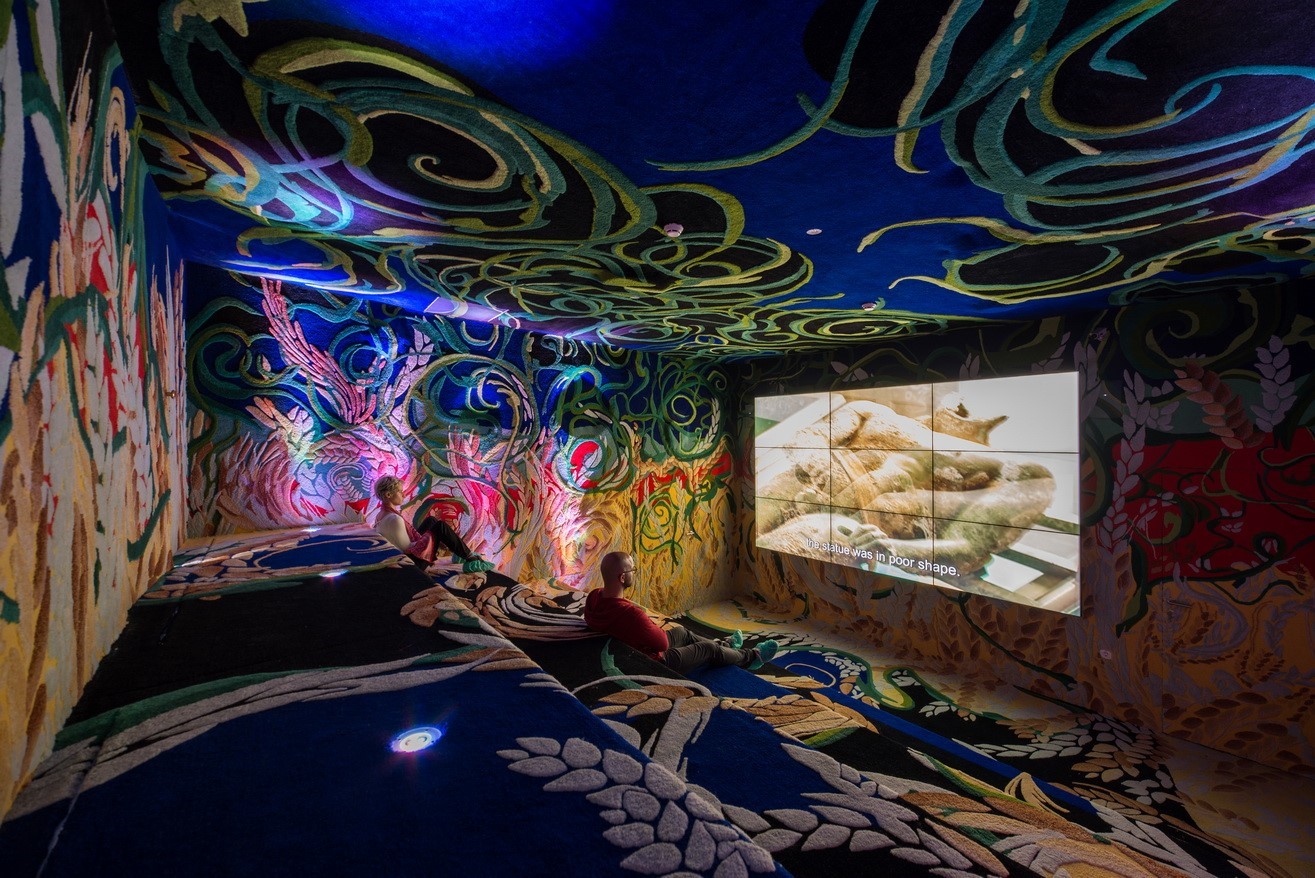 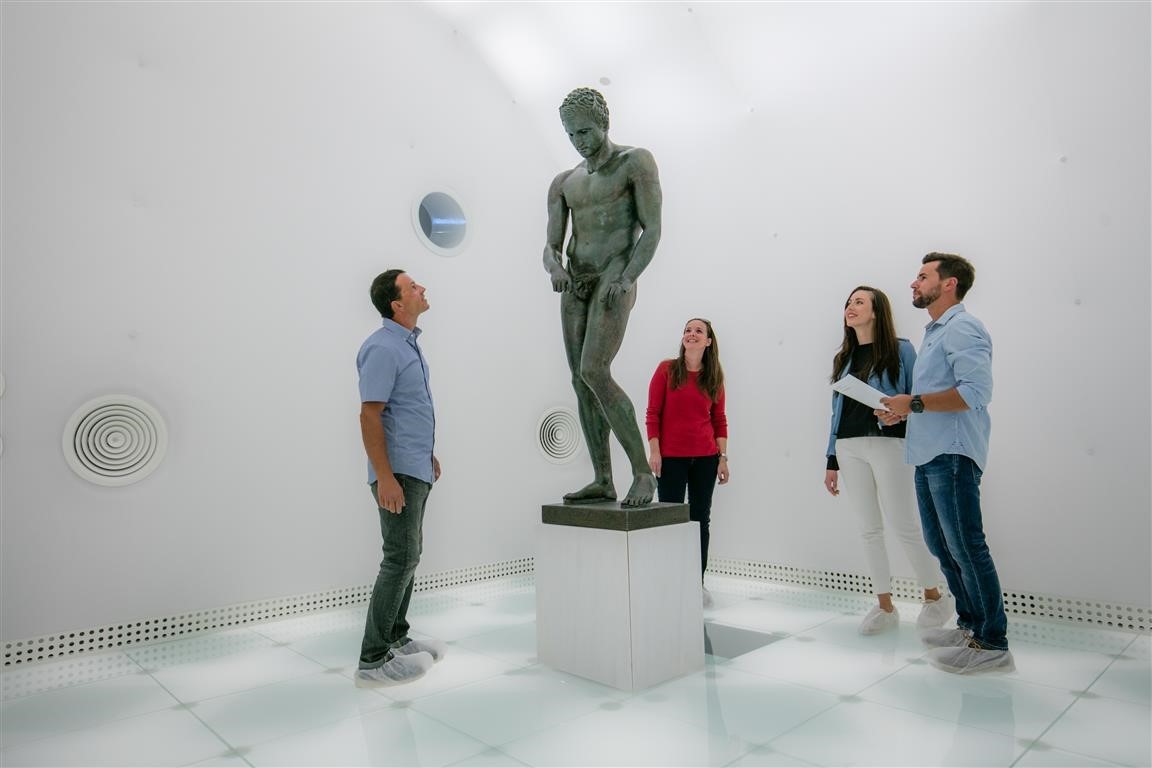 THE TOWER – MUSEUM OF LOŠINJ

Freestanding circular Tower in the centre of Veli Lošinj was built in the 15th century, during the first decades of Venetian domination over the eastern Adriatic coast. With thick walls, small openings, and a relatively low in height to withstand cannon fire from the enemy ships, it was defending the inhabitants of Veli Lošinj against pirate raids.

GROUND FLOOR
Ground floor is dedicated to Apoxiomenos. Central place takes a full-sized replica, in the position as it lay on the seabed. It is also exhibited image of the restored Apoxyomenos, as well as documentary film about the finding itself. Among the rest are exhibited casts of fragmentaqry reliefs from Roman funerary monuments with depictions of crafts from the 1st and 3rd centuries AD. A boat like this transported the Apoxyomenos statue.

FIRST FLOOR – HISTORY OF VELI LOŠINJ
The first floor is dedicated to the history of Veli Lošinj from prehistory untill the 20th century. Although there are several prehistoric localities on the Island Lošinj, first permanent inhabitants came at the end of the 13th century and founded Veli Lošinj. During time new representative buildings where built, which are presented on the panel with the most important cultural and historical monuments and places. The central place takes installation with amphorae found in the underwater of island Ilovik. Turkish and Austrian weapons from 18th and 19th century is also exhibited. The weapons is donation of doctor Ana Jakša.

SECOND FLOOR – MARITIME HISTORY OF VELI LOŠINJ
On the second floor is presented maritime history. The portraits of famous captains of Veli Lošinj, as well as paintings of their sailing ships are exhibited. The central place takes model of the sailing ship Esempio, the last which was built in the shipyard Rovenska in 1877. Navigation instruments and ship equipment are also presented. In the metal ship chest from 18th/19th century is exhibited shipbuilding tool of Ignazio Budinich, one of the last shipbuilders of wooden ships in Veli Lošinj.

THIRD FLOOR – MARITIME HISTORY
Onthe third floor are exhibited models af sailing ships: Istrian merchant sailing ship of the 15th century, bracera, the Lošinj lugger, the Lošinj grip and marsiliana. These model present shipbulding and maritime tradion of the last 500 years on the island Lošinj. They are made by Ferdinand Trenc, a retired University professor of the Faculty of Mechanical Engineering in Ljubljana. 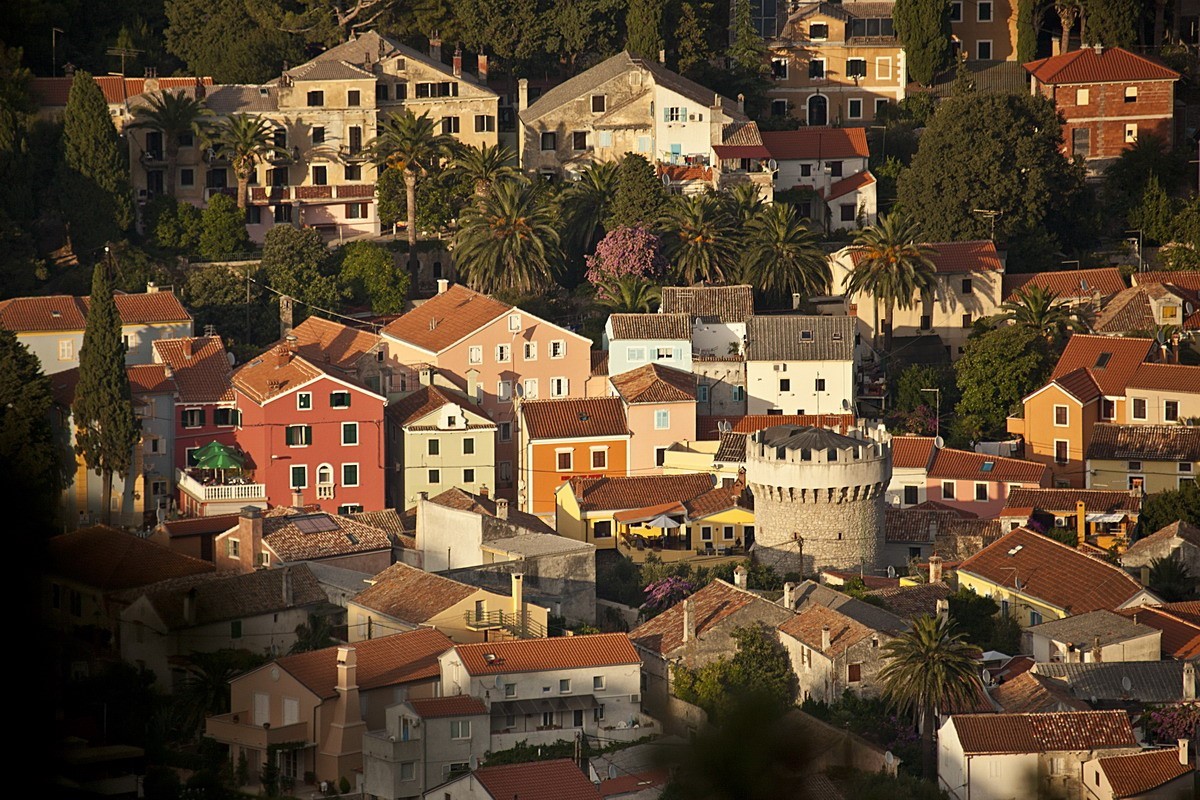 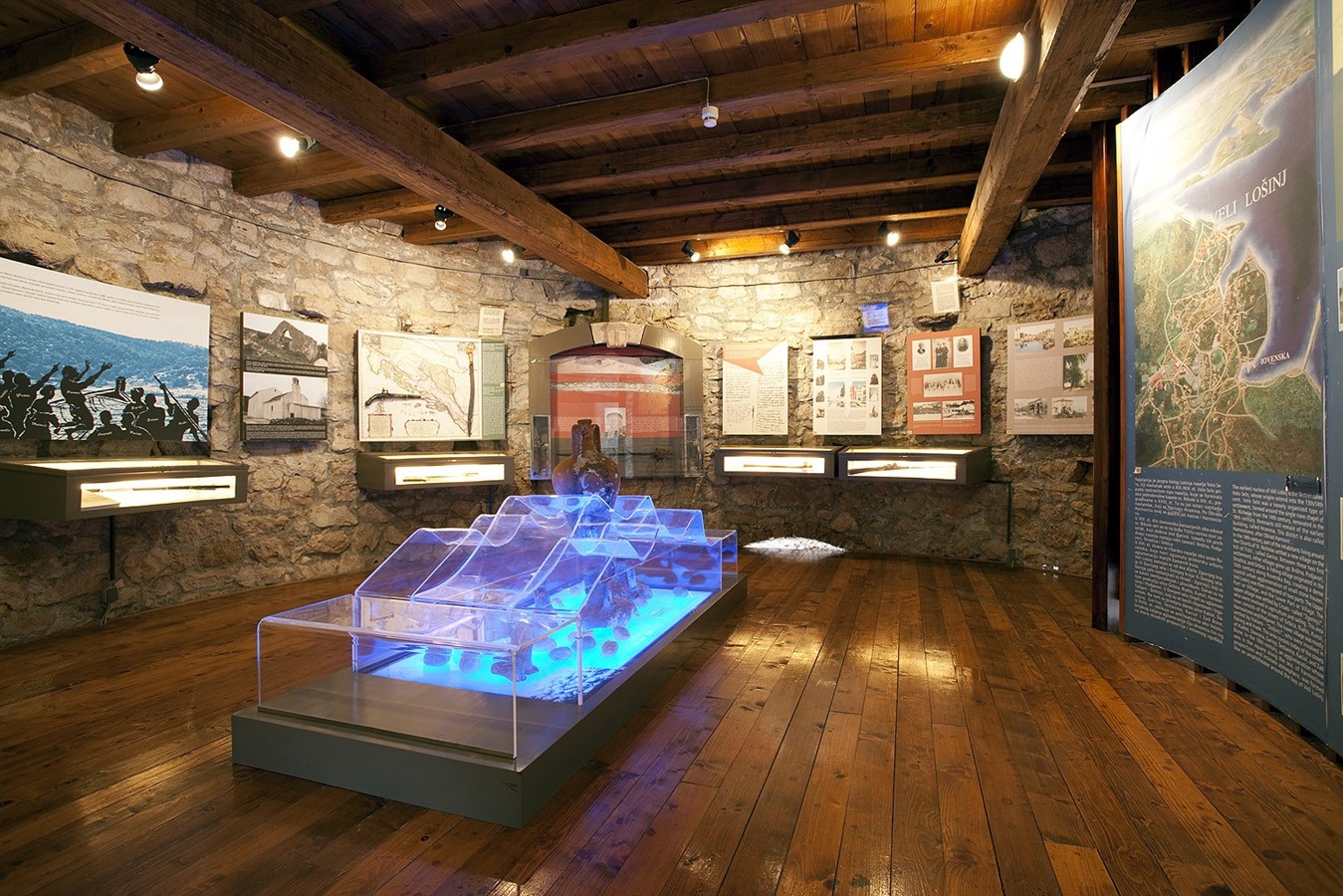 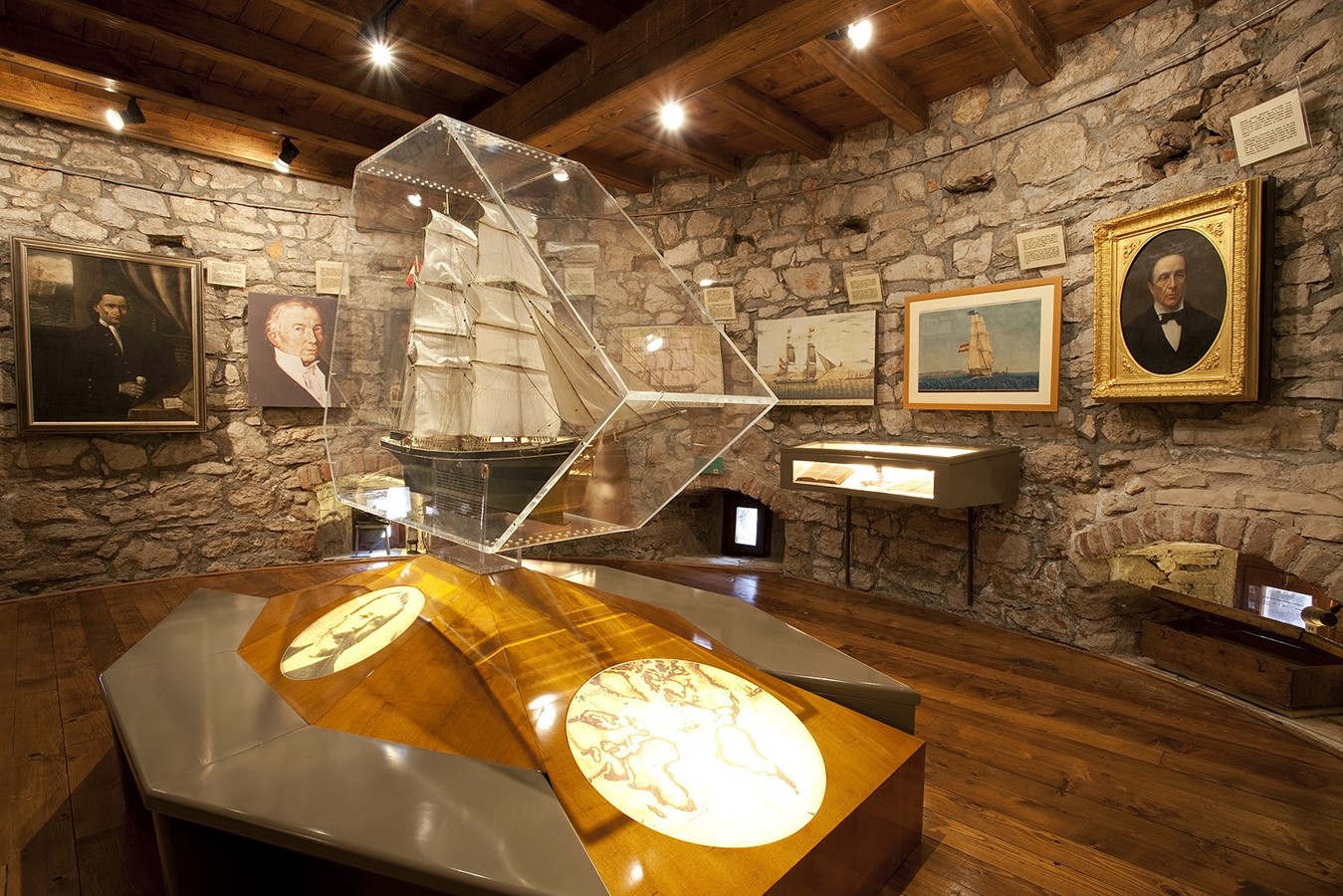 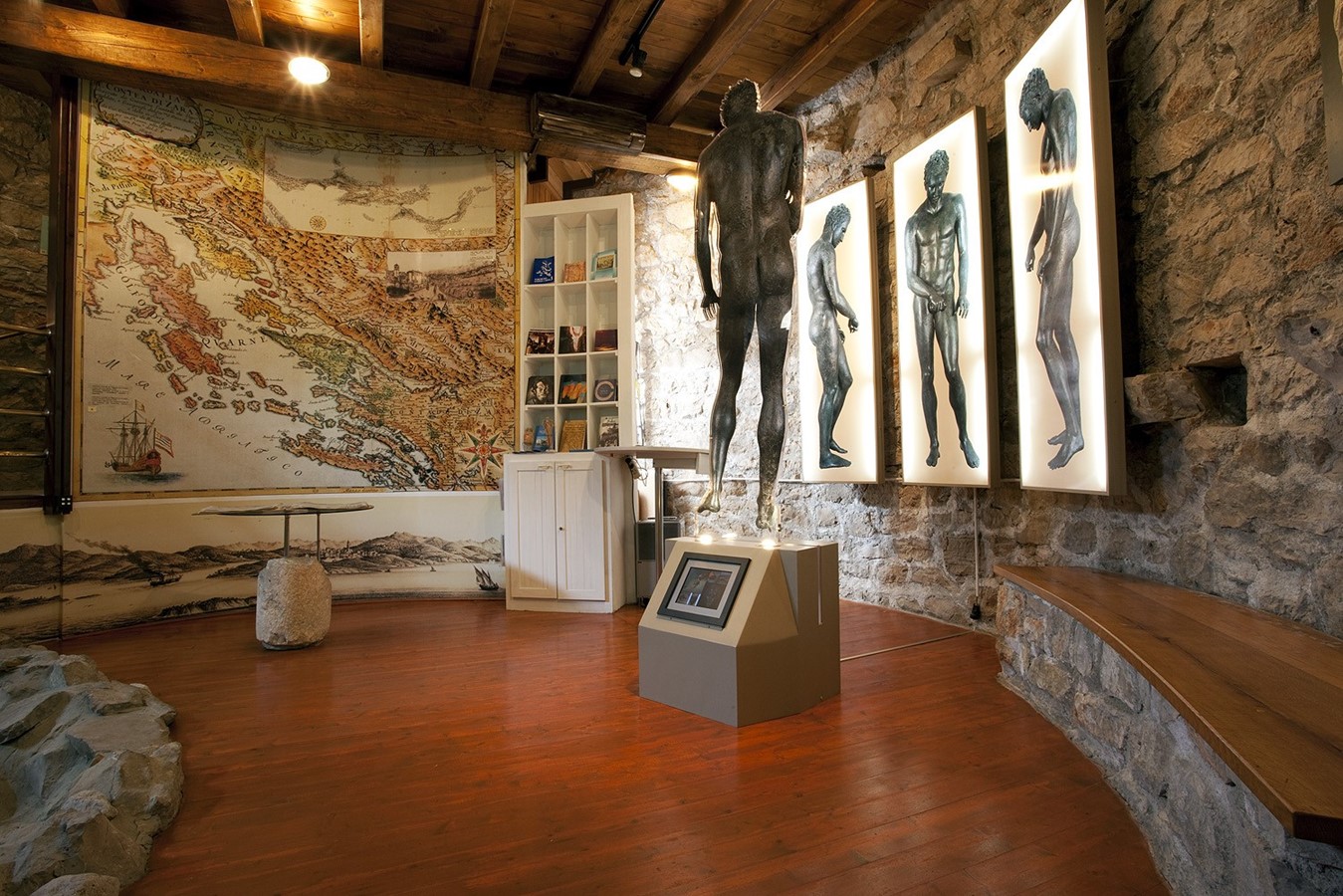 The collection was opened to public in 1889 and since then it has been housed in the building of the former City Hall and loggia. It is a Renaissance building from the first half of the 15th century. Other public buildings in the main square, the Bishop’s Palace and the Cathedral, date from the same period. The building was protected as a monument of culture in 1964.

Beginnings of long and turbulent history of the Archaeological Collection of Osor reach back to the 18th century and are related to Dinaričić, the Bishop of Osor who, according to the records by Alberto Fortis from 1771, acquired the first collection of stone monuments in the Bishop’s Palace in Osor. A hundred years later, the collecting passion of Bishop Dinaričić continued with Ivan Kvirin Bolmarčić, a parish priest. As an amateur archaeologist, he undertook the first archaeological explorations in Osor in the period from 1874 to 1881, researching the city walls and the Illiric-Roman necropolis on the Lošinj side of the Kavuada channel, eventually acquiring a respectable archaeological collection which consisted of several thousand items in 1880. In 1889, the archaeological collection of the parish priest Bolmarčić became the property of the Municipality of Osor. It moved into the building of the Osor City Hall and was officially opened to public. 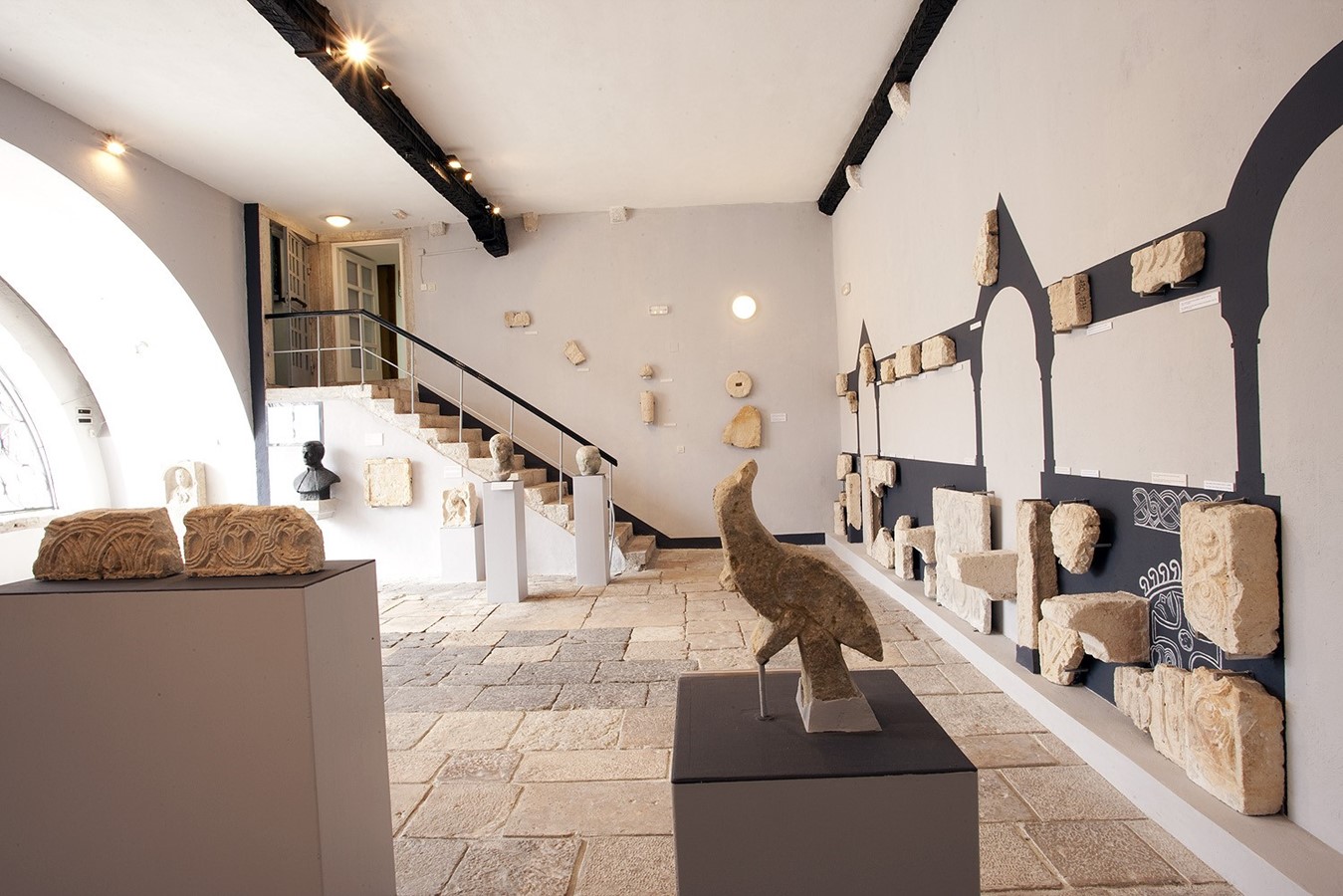 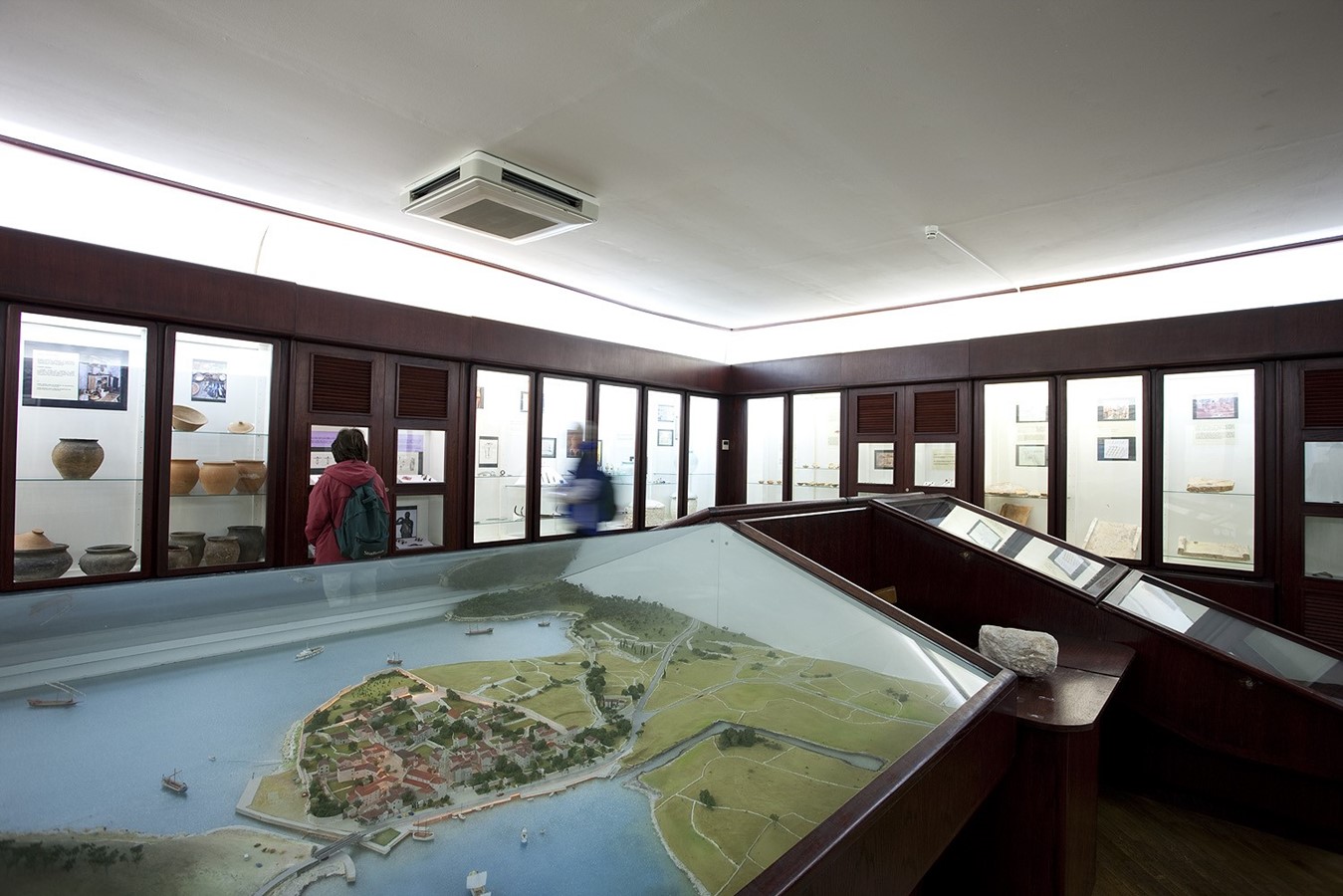 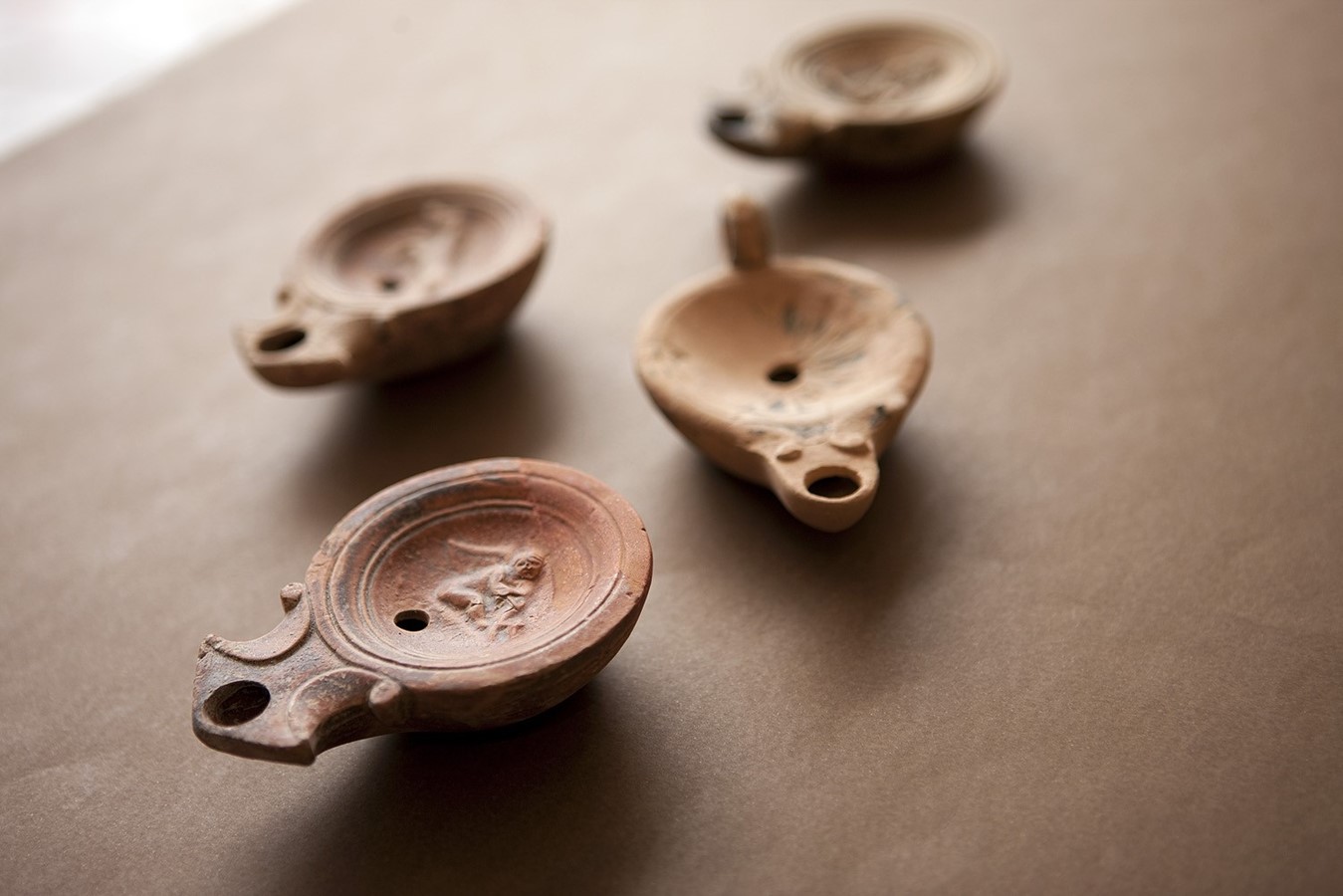 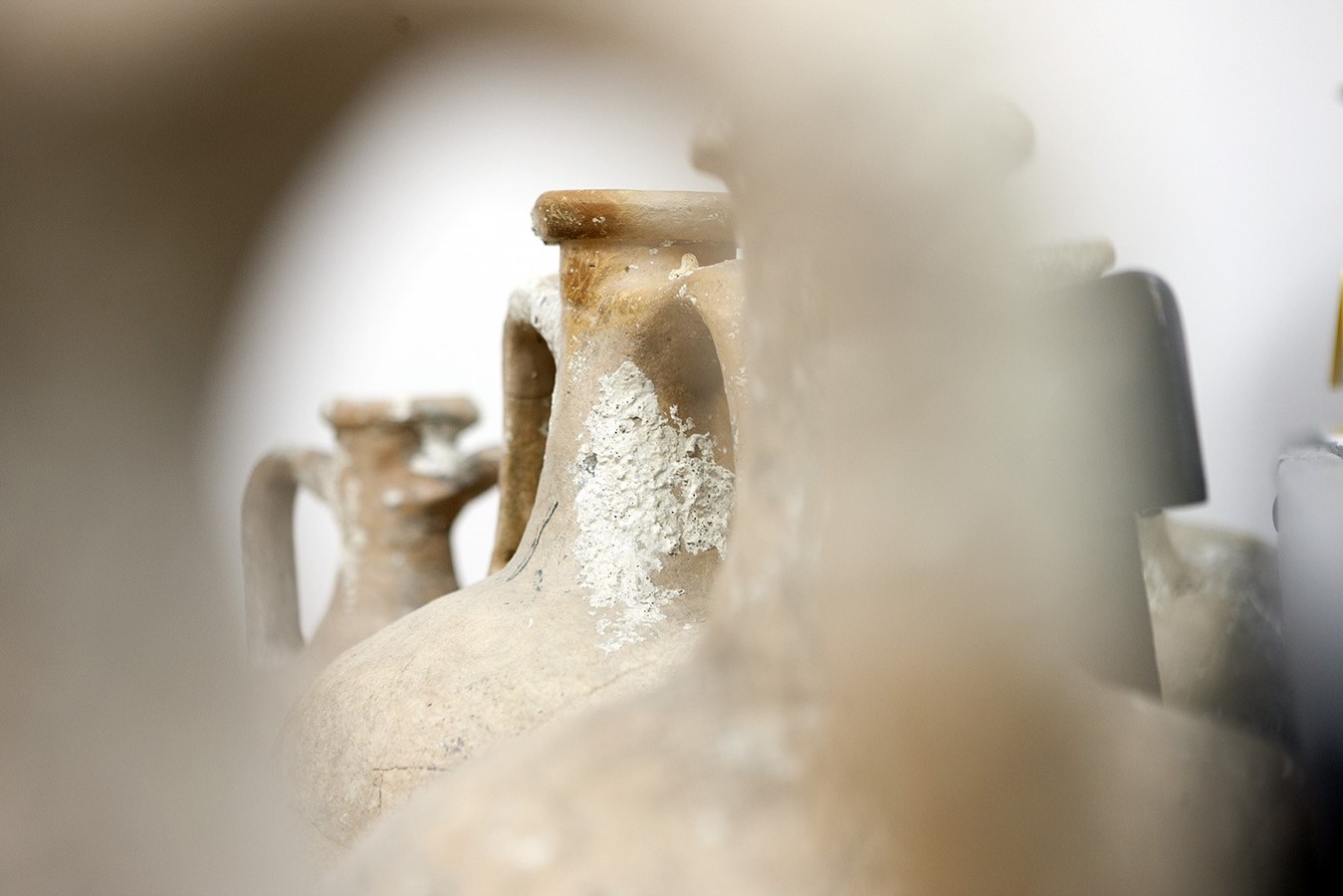