Lošinj is part of the Cres-Lošinj archipelago. The Cres-Lošinj archipelago includes Cres and Lošinj, and the smaller islands of Unije, Ilovik, Susak, Vele Srakane, Male Srakane and a number of uninhabited small islands. Cres is the biggest by area, Lošinj is second. Cres and Lošinj are connected by a small bridge at the town of Osor on Cres. The highest elevations are the mountains Televrin (also called Osoršćica) at 588 m (1,929 ft) and Sv. Nikola (also called Sv. Mikul) at 557 m (1,827 ft). The towns of Nerezine and Sveti Jakov lie at their base. The island is formed predominantly of chalk limestone and dolomite rocks. There are sand deposits in the western part of the Kurila peninsula.

With around 2600 hours of sunshine a year, the island has become a popular destination for Slovenian, German and Italian tourists in the summer months. Average air humidity is 70%, and the average summer temperature is 24 °C (75 °F) and 7 °C (45 °F) during the winter. 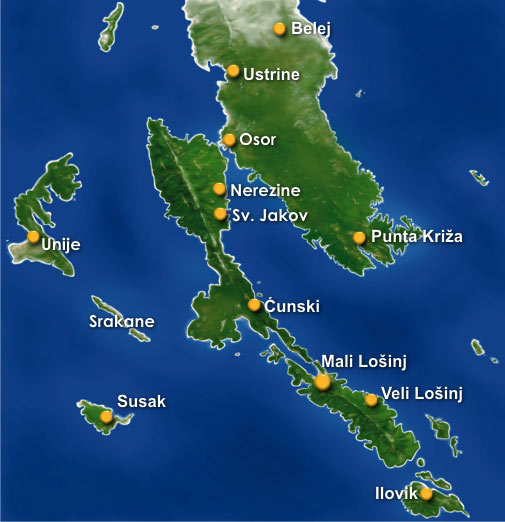 The island has a mild climate and evergreen vegetation (like myrtle, holm oak, and laurel). The highest elevations in the north have more sparse vegetation. Veli Lošinj, Čikat and the south-western coast are ringed by pine forests.

A mild climate, rich biodiversity, a pleasant environment and 250 cultural and entertainment events – these are just some of the reasons why Lošinj has become famous as the island of vitality in the international market.

Health tourism is an important tradition here and it has been on offer for more than 125 years. The combined fragrance of thick pine forests and medicinal herbs create unique aromatherapy in the open.

High quality seas and supreme air quality with over 200 days of sunshine and 1018 plant species, of which 939 belong to indigenous flora, make Lošinj the ideal aromatherapy centre and a modern destination of vitality, health tourism and environmental awareness.